Screen-printing is the most painterly of the printing techniques. It allows the use of layer upon layer of color, exploiting line and mass in bold ways. The inks can be printed as rich impastos or thin, transparent glazes. The result is a print that is both vivid in hue and displays a rich tactile surface.

Screen-printing as we know it today evolved from stencil printing, one of the oldest of all printing methods. Early Japanese and Chinese hand cut stencils were so complex that they were held together with small silk threads. Eventually, the stencil pieces were adhered to an open weave silk fabric stretched over an open frame, and ink was forced through the screen to create the print.

In the Orient, stencil printing was used to make both fine art prints and (delete “as well as”) craft items. Fabrics, robes, scriptures, and various decorative goods were made using this method. In Europe, craftsmen adopted the stenciling technique for mostly utilitarian purposes. Stencils were used to add color to playing cards and religious pictures printed with wood blocks. By the Seventeenth Century, the technique was being used to print ornate wallpapers. By the late Eighteenth Century, stencil printing had made its way to the New World. Homes in New England were filled with stenciled papers, textiles and furnishings. It was not until the 1930s that screen-printing started to be used as an artistic medium in the United States.

Under the Work Projects Administration, a group of artists in New York City explored the creative possibilities of the medium for painters and printmakers. It was at that time that an art historian coined the term serigraph. “Seri” is from the Latin word for silk, and “graph” from the Greek word graphos, to draw or write. Today, screen-printing can be as simple as those early, hand-done techniques, or use sophisticated photographic methods and the latest digital technology to produce highly complex fine art images. 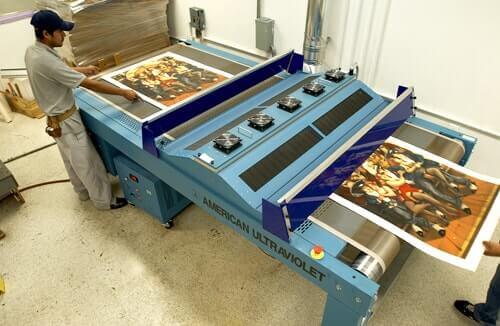 Learn more about our other methodologies: